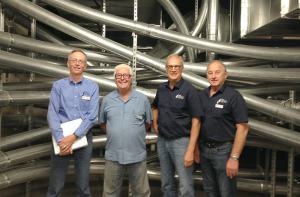 It’s taken the judges working nearly full-time hours for the past five weeks, but they can now say they’ve reviewed all the nominee presentations for the 2018 Awards of Excellence.

Now in it’s 30th year, the 2018 Awards of Excellence is the largest yet. This year’s awards attracted a record-number of project nominations – 205 – and resulted in judges reviewing 40 per cent more presentations this year than last.

“I am really impressed with the judges and the number of volunteer hours they’re putting in to review all the projects – they’ve had a busy schedule of presentations and site visits,” said Andrea Ringrose, VRCA’s education manager who is coordinating the judging process.

“I was also impressed with the interesting and innovated presentations by our members to the judges. Thank you to the members for all the work that went into the nominations, and for making it a record-breaking year.”

The Awards of Excellence judging committee features nine members with a combined 404 years of construction industry experience between them. Most have retired from their careers in the industry and continue to support VRCA as life members.

One silver award winner from each category will be announced as the Gold Award recipient at the Gala event on Oct. 23 at the Vancouver Convention Centre.