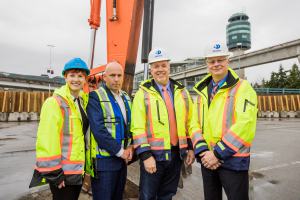 Today, Vancouver International Airport (YVR) broke ground on a number of capital construction projects to enhance the airport experience and improve YVR’s competitive position as a world-class connecting hub. The projects are part of YVR’s multi-year expansion plans that will see the airport complete 75 major projects, totaling $9.1 billion over the next 20 years. 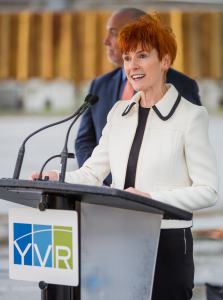 “The Vancouver Regional Construction Association applauds YVR’s vision and investment in its airport infrastructure as it will bring significant economic and employment benefits to both the construction industry and the province as a whole,” Famulak said. ” Our members have an excellent track record of delivering state-of-the-art construction projects at YVR, and we look forward to working in partnership with the airport authority to help it realize its vision to be a world-class sustainable airport hub.”

YVR is one of the fastest-growing airports in North America. It welcomed a record 24.2 million passengers in 2017 and is forecasting 32 million passengers by 2022. About 327,000 tonnes of cargo are expected to move through the airport by 2020. These newest construction projects will improve the speed with which people and goods move through YVR, and provide passengers with a wide range of compelling offerings and amenities.

YVR plays a significant role in the local, provincial and national economy—creating jobs and driving business activity. The airport supports 24,000 jobs on Sea Island and more than 100,000 jobs across British Columbia. YVR’s operations—together with tourism and cargo—contribute more than $16 billion in total economic output, $8.4 billion in GDP and $1.4 billion in government revenue across British Columbia. Each new flight through YVR creates hundreds of jobs and contributes millions of dollars in economic benefit to the province.

The expansion projects will have significant economic and employment benefits in the region. By the end of 2018, construction activities at YVR will create nearly 2,500 full-time construction jobs on Sea Island and hundreds more off-site. Much of the work will be done in the province, offering a significant number of jobs for British Columbians.

YVR’s multi-year expansion plans are made possible by YVR’s unique, not-for-profit operating model. YVR receives no government funding and all profits generated at YVR are reinvested back into the airport for the benefit of its customers, partners and communities.

To learn more about YVR’s key projects that will enhance the airport experience, please visit yvr.ca/construction.